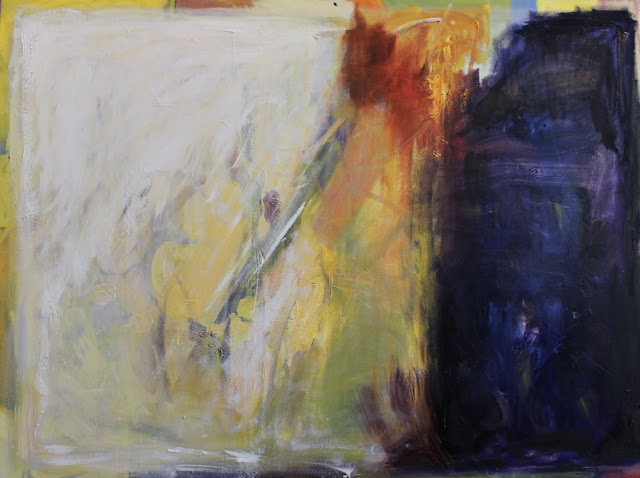 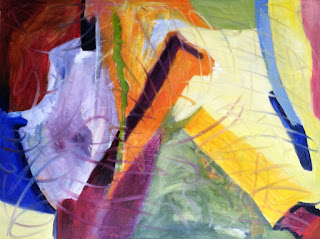 This painting began (bottom image) as a an attempt to let go of the full blown heavy painterly images.  As is often the case, i cannot leave well enough alone.  It is SO HARD for an artist to “know” when a painting is/should be finished.  But me being me, i was unsatisfied and added a border in image #2.  Still didn’t seem quite “finished” so i added more paint via aggressive brushwork (#3).   By the time i got to image #5,  “Exalted Warrior,” from a yoga pose that i learned in my practice
Exalted Warrior
…Is the name of a Yoga pose that helped me to undo the knots bound up in my hips and shoulders.  It helped to transform my quest to become a fearless aRtist.
In 1976, i joined the Navy to get outside of myself.  As part of my training, i was required to jump out of a “perfectly good airplane” to prove my “worthiness”  to pack the parachutes of SEAL Team.  i gulped down my fear,  trusted in the training  and took the leap:   Very effective.  When i stood up again upright, i had survived, but more importantly, felt exhilarated at the freedom to unleash the binds, literally.  The adrenaline rush of doing something TOTALLY outside of my comfort zone stayed with me long after i left the service although i had to continue to practice at it.
Formally, this painting is the compilation of several layers of paintings, each layer successively  covering the one underneath, with which  i was displeased.   There is at least a small corner of each layer still visible in the final.  This way i can continue to honor the path that i took to arrive at this place.  The canvas is dissected approximately in half, visually and in terms of negative (dark indigo) and light (yellow and white) representing my struggle with traditional and fearless.  The borders of the original paintings provide the backdrop for the transition to the present.  Red represents  blood, suffering, rage.  The white is purity within a childlike innocence that fearlessness represents.  Indigo is where i am headed on this quest.  Dark and usually misunderstood.