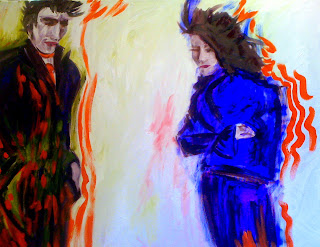 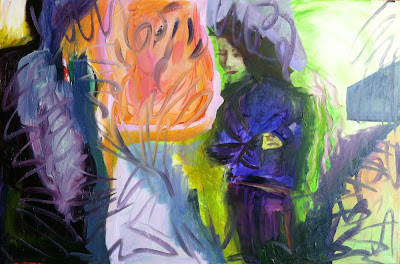 These two creatures (Losing Dignity) are in the midst of a crisis.  It is one of the few figurative paintings i have made. The painting on top, begun in 2010, was recently completed in a clean sweep of my studio, and was renamed, Prodesse Qual Conspici (2014).   All projects that i remain unsatisfied with are getting a new treatment.  The man in this picture has lost his composure, and therefore, his dignity.  His face (identity) are obscured because of the loss of dignity.  i don’t know how else or how better to express what is going on here.  it turned out that way only because when i finished, did i recognize the subject/theme. It is not a self-portrait. Why these colors?  They go lovely together, yet they clash.  They express turmoil and anger in a beautiful way.  The lines and marks and squiggles are words flying about.  Note the light and dark contrasts.  More than anything, this picture expresses a complete repudiation of “playing by the rules” (“coloring inside the lines, dear.”).  Prodesse Qual Conspici means “to accomplish without being conspicuous.”  It is on the Miami of Ohio University Seal, my father and sister’s alma mater. 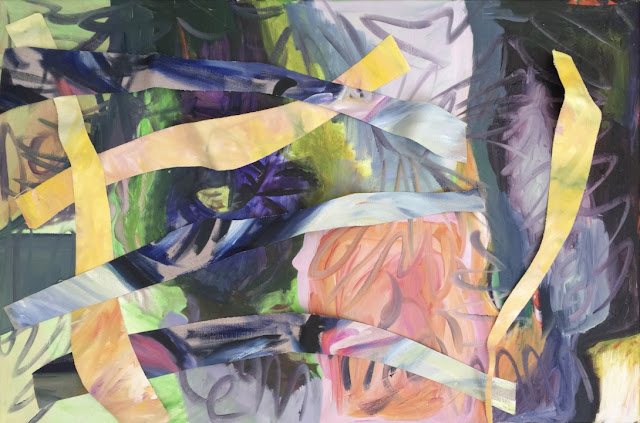 Prodesse Qual Conspici (v. III) 2016
Finally, after sacrificing (cutting) two paintings i was dis-satisfied with (“Chuck” and one other untitled), the remnants were glued to this painting to create a collage.  It is SO much more interesting now.  The colors are positively out of control.  Perfect.