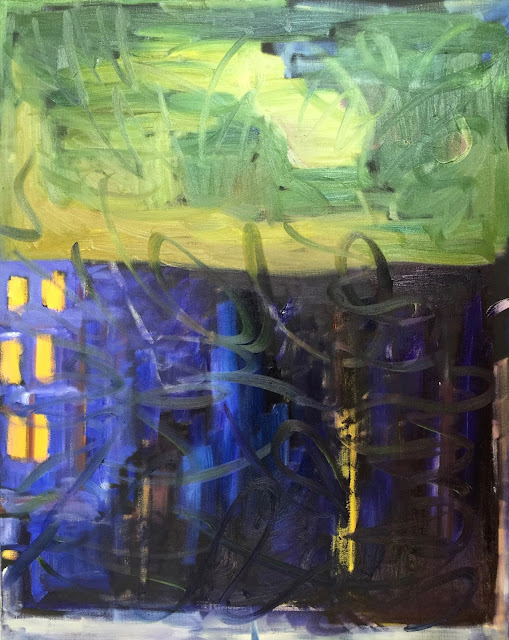 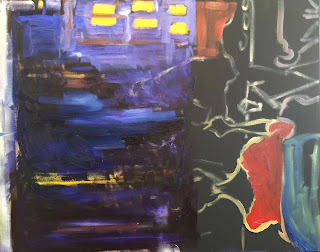 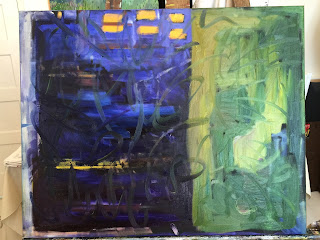 First iteration
Completed, in the original horizontal orientation (with background)

Black canvas experiment is not working for me.  Top image is a sketch of what was supposed to be another restaurant scene that i was hoping might create some “drama” in the painting, but i am not feeling it with the dark canvas.  Black background apparently inhibits my imagination, although when covered completely in paint, it doesn’t matter much if the canvas is black or white.  Shout out to my painting instructors at Old Dominion University (BFA 2010):  Elliot Jones who introduced me to colorfield painting, and Ron Snapp who gave me permission to forget about everything (yes EVERYthing)….and “just paint.”  i had banned Thalo from my palette, but since i have a whole tube of the stuff i thought i should use it up.  SOmetimes i feel like my parents’ generation who refused to waste anything due to the shortages during the Depression.  When mixed with yellow (top half of top image), it (thalo) does indeed create a beautiful green….which when mixed with just a smidge of white, creates a sublime Ghostbusters kind of green.   i still love to splash the paint up leaving “clues” to the original underneath, then swirL the entire composition with a sweeping brush to help mix the colors and give a feeling of “movement” to the composition.  This was another iteration of my red violet/yellow green theme of four years ago.  i titled this piece 1) because the colors look like a salad with fresh pansy flower garnish  2) anticipation of “Gastronomy” show at Healdsburg Center for the Arts coming up soon.  The under-coating piece took about an hour (or ten, including the research time), and the top layer about another hour, spread out over 3 months.  Sometimes when people ask me how long it took too create a painting, i respond:  “an hour and 40 years” as i believe Jackson Pollock once responded to a similar question.  What many people assume is that a painting should require months  (if not years) of painstaking, detailed research, sketching and execution.  Great, if you are painting realistic, representational work, But a “successful” abstract painting does not FLOP out by accident.  There are lots and lots of abstract paintings (many i have created) that don’t work.  When one works and is successful, it shouts out, “i stand alone, ready.”